"I got involved in the OLB-case, when a well-known Westfrisian, mr.dr. Arian de Goede, gave me the advise and mission to investigate a book-trader from the Nw. Westerstraat, in the archives of Enkhuizen. This was concerning the Oera Linda Book.

The reason was that this De Goede, later professor in Bandoeng (Dutch Indies), had notes of his great-great-grandfather Arian De Goede, mayor and dike-grave of the Schermer-polder, about a book-trader in the Nw. Westerstraat, who would own a chronicle that went back to 2000 BCE. He wanted to buy the chronicle, but the man did not want to sell it, because it was an age-old family-chronicle.

De Goede read aloud this note in a meeting at his home in Utrecht in 1950. For this meeting he had invited: Dr. Nieuwenkamp and Dr. Rühl, both heraldists, who had examined the Over de Linden coat of arms and dated it as from the late 18th century (...); mister Molenaar, who had just published an important brochure, in which he proved that the book had been in Enkhuizen in 1848; a Mr. Jacob from Utrecht  (...); J.F. Overwijn, author of the 1941 and 1947 editions of the OLB; a professor from Stockholm (this turned out to be Hermann Wirth, who had lied about his identity). There were two more persons, who said nothing and who's names I forgot, and finally there was me." 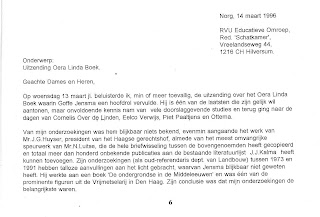 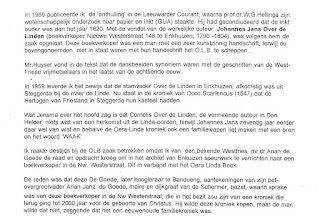 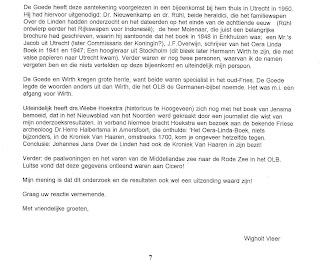 Together with Herman Wirth ("prof. dr. Herman Felix Wirth Roeper Bosch" as he sometimes named himself) he had founded "Stichting voor Oergodsdienstgeschiedenis" in 1949, but within 2 months they ended it as a result of conflicts.

Other than a book by Overwijn, the inventory has no entries that directly refer to the OLB, but it is clear that De Goede invested much effort in Westfrisian history, language and culture.

If the note of his g-g-grandfather really exists it would be highly significant.
There should be references to it somewhere in his notes or correspondence.
Jensma did not mention De Goede in his thesis.
This deserves further investigation.
at 11:23