Abramelin, on 10 June 2012 - 07:25 AM, said:
I meant the posts by Swede and others about geology, Cormac's posts about genetics, and posts about archeology.
Posts that were critical concerning the theories in his book.

Those critical posts were not strong enough to make me doubt that his main conclusion is right.

For me, even without Alewyn's evidence, it is evident that OLB must be authentic, because it is just way too complex for human minds to fabricate something like that out of nothing, specially in the 18th century.

If it were a 19th century hoax, it would fit more in the belief system of that time. Things in it that by then were considered totally outrageous, by now actually seem to be possible.

If it were fake, that should become more evident through the years, not less, which is the case.

And like I said before: why does that paper-study have to take more than five years?
Still no clear results.
If the paper would be from a 19th century factory, that can be established within one week.

Edit: one thing I think he should have mentioned is, that the flood year was also known in 19th (18th?) century Frisian almanaks.

Abramelin, on 11 June 2012 - 01:05 PM, said:
I think the bolded sentence in the last quote gives the major limitation here: the OLB manuscript has of course been in many hands during more than 160 years.

I don't think it should be too difficult to remove a very thin layer from both sides of a scrap.

Besides carbon dating, comparison with known paper from 19th century factories should be easy.
The claim was that it would be from a particular factury in Maastricht.
Paper from this factory must be available in archives.
If the claim is true, the composition of the paper should be the same.

Abramelin, on 11 June 2012 - 02:20 PM, said:
I have serious doubts about how people in the 19th century handled the manuscript. As you know, nowadays they use those white disposable gloves.

That why I said they can remove a microscopic layer.


Quote
About that paper factury in Maastricht: didn't they have samples of their paper and had it not already been compared with the paper of the manuscript?

If they have, it didn't provide the proof they wanted or it would have been published.

A demagogic article with some false conclusions.

1. That he would have "secretly kept" them is an interpretation, not a fact, and it also does not make sense. If he was indeed the copyist, he would have gotten rid of the empty sheets, as he kept fanatically defending his truth till his death bed.

2. The sheets are of "almost the same composition", that means not of the same stock.

3. Even if they were of the same stock, that would not prove that OdL has to have been "involved as copyist". In theory, his uncle Hendrik Reuvers, or the husband of his cousin, Rijkent Kofman, could have made the copy. OdL could have received the manuscript including the empty sheets. That would explein why he kept them. He saw no harm in it. If he would have been 'guilty' of making the copy, he would not have been so stupid as to keep the leftover paper.

Posted Yesterday, 05:07 PM
Something else:

"The makers colored the paper in a (liquid) pigment, then they dried and pressed it before they wrote on it."

If this would be the case, the paper would be colored in the inside as well, because a liquid would penetrate the fibres.
But the paper is white from the inside.

And why do they not mention what sort of pigment was used for the coloring?
That should have been an easy one, since they can compare with the empty sheets.

When I asked them this last year, they answered that they would no longer answer my questions.

If the 'makers' would have done all this effort, they could have easily made the paper look older than it does.

It just all does not make sense.

-1- These 3 people had to pay from their own pockets to be able to do the research.
-2- It will have cost them quite a lot of money (and time).
-3- They will publish their findings at the end of this year, and.... probably on some site where you must pay for some paper/document to have it sent to you.
-4- And by that get compensated somewhat for their financial investment.

I do not think any money is involved.
The only thing they invested was their time.
They also will not try to sell it.

By stressing the fact that it is a voluntary project they suggest to be independent, but they are totally biased.
What this article does not say is that Jensma leads the project.
Again, his theory is presented as fact, although none of the specialists who were speaking at the presentation of his book in 2004 believed it.

The information this paper group supplies is vague, incomplete and suggestive. They should be happy that someone is interested, but when I started asking critical questions, they closed the door. That is the kind of behavior of someone who is lying.

Between the lines, I read that they are either blinded by tunnel vision (they see only what they want to see), or they are indeed lying. I know they would have good reasons to do that.

Abramelin, on 12 June 2012 - 08:47 AM, said:
Instead of discussing the article about the research, here is the research paper itself:

The Oera Linda Boek - A literary forgery and its paper

Yes, I remember emailing that to you.
Good thing that you published it online now.

He is my discussion about it (copy from UM onto my blog):
http://fryskednis.bl...scientific.html

Abramelin, on 12 June 2012 - 11:35 AM, said:
And after recently an unknown picture of Haverschmidt from 1868 showed up in his (= Cornelis Over de Linden's) granddaughter's inheritance, Jensma now hopes for a similar find: a letter.

No, that was about HaverSchmidt's inheritance, not that of OdL.

Abramelin, on 12 June 2012 - 11:44 AM, said:
I don't think that's what they mean: what would it prove or disprove if a granddaughter owns a photo of her grandfather? But it would certainly look like a clue if it was Over de Linden's granddaughter who owned a photo of HaverSchmidt.

Jensma still hopes to find proof that HaverSchmidt did it, because he knows his job is not well done.
He hopes that a letter will appear in which he confesses that he was involved.
That photo simply shows that after all these years, still unknown material from/ about HaverSchmidt can surface.

Abramelin, on 12 June 2012 - 11:56 AM, said:
In the correspondence about the book they found a note from Verwijs that was really written on the same, for that time special 'English paper'. "Too coincidental to be a coicidence," Kardinaal chuckles. And that's how, after Over de Linden, also Verwijs let himself be caught as an accomplice.

I cannot believe these people are serious.
Here is the fragment prior to yours.

The unlocking of wood was a specific American procedure, for the first time commercially applied in 1866 in Pennsylvania and in an English paper factory in Gloucestershire. Because the Oera Linda-paper contains sodapulp, which suggests unlocked wood, it dates of minimally 26 years later than always was assumed.

How realistic is this, really?

In 1867 OdL started trying to have the manuscript translated, and he would have written it in less than one year previously, when he was already an old man, and on the newest possible paper available?!

This is totally insane.

They have not proven that the OLB paper is from that English factory, only that it contains sodapulp, "which suggests unlocked wood".
They are not even sure that Verwijs' paper is the same.

I respect your belief.

So you would use paper that is made with a technique that is only used since let's say 2011?

And I am a 100% sure they will never find such a letter, because it never existed.

Posted Today, 01:04 PM
If the paper is proven to be from that Gloucestershire factory, they should clearly say so.

They don't, they are merely suggesting it.

First let them clearly prove and state that it is from that factory.
Until then I will not take them seriously.

Again, I am the skeptic here, not you.

Posted Today, 02:10 PM
If it was a hoax and the supposed makers appearantly made supernatural efforts to create an illusion of authenticity, why would they include things that made it totally unbelievable (in that time), like the story of Jes-us from Kasamir, and many other examples?

In this thread it became clear that the ideas in it, that in the 19th century were seen as absolutely outrageous, are all, in fact possibly true.
~ ~ ~
Article (added 21-1-2014) for future reference: 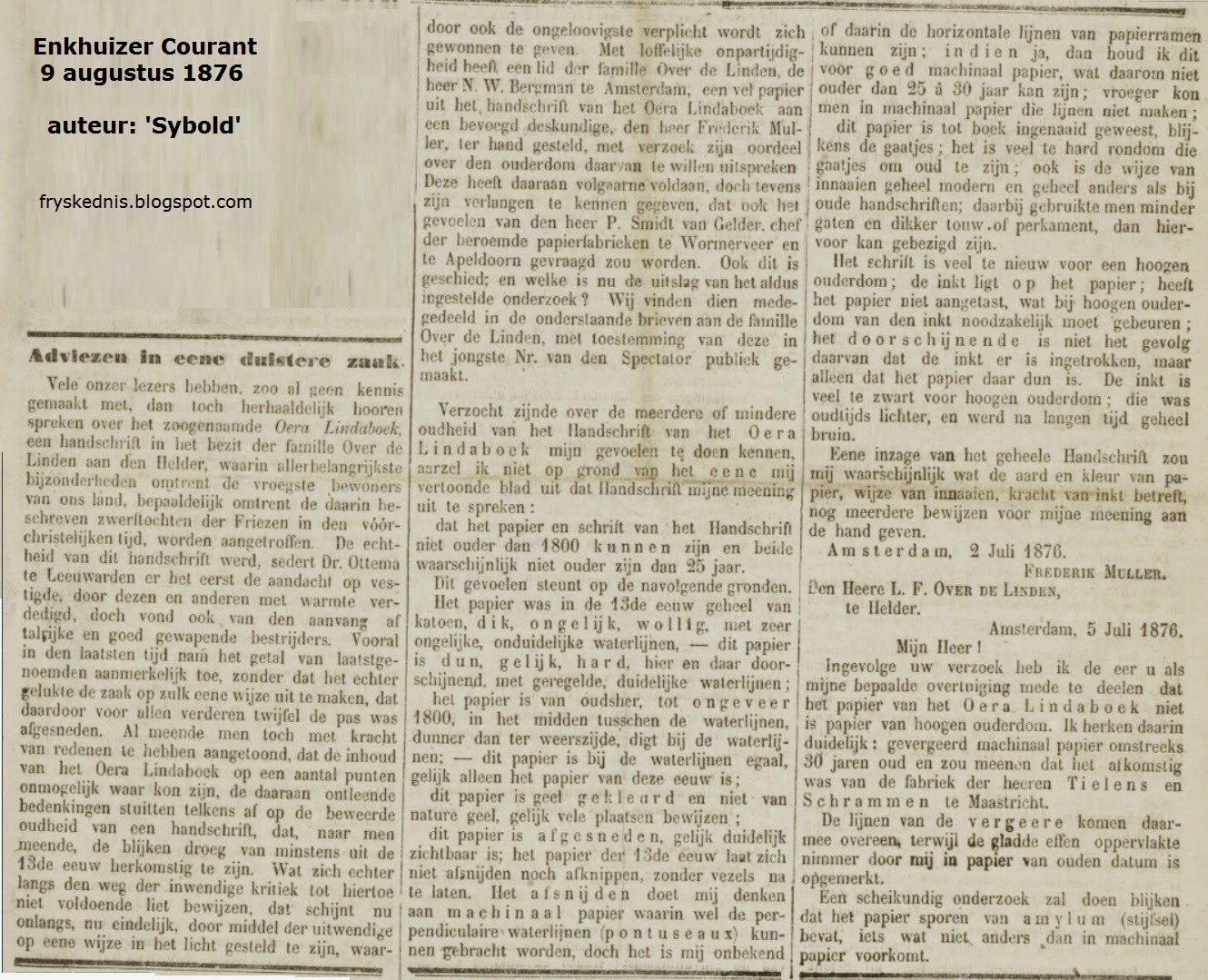 Arab paper probably contained plant (or tree) material, since they learned it from the Chinese. See fragment (p.58-59) from: "Science and Technology in Medieval European Life" by Jeffrey R. Wigelsworth; Greenwood Publishing Group, 2006. 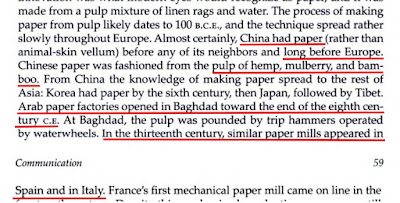