We have seen how Alewyn found it hard to accept that the Fryan culture was matriarchal (led by mothers), because he had imagined differently.

Jensma at some point must have gotten the idea that OLB is actually about a 19th century religious conflict, and that much of it was ment to be funny. Many of his footnotes are: "grappig bedoeld" (pun intended).

Example (at page 146 line 12-13; my paraphrased translation):
"Kauch ... Kâp - not totally clear; possibly the (farfetched) joke is in the difference between the German 'kauf' = buy, purchase, deal (Dutch: koop) and Oldfrisian 'kâp' which means the same, and therefore the joke is, that the Chauci derive their name from the Frisian word for 'buy'."

People tend to see the things they want to see, and in extreme cases they even see things that are not there.

I ran into a hallucination or delusional perception (?) from Jensma that I want to point out, just for the record.
(I sometimes use this forum as a notebook, for future reference.)
In general, his transcription is an improvement to the one by Ottema, but in this case he has corrupted a word that was correct.

Where the text clearly has "INT", Jensma transcribed "IVT", and he translated "gejut" (jutted = beach-combed).

In the fragment (see scan) "JUTTAR" is clearly both times spelled with an I-dot (J) and a round U, not a V.

Sandbach:
"so they took possession of the land"

INT = geïnd = ingenomen = in bezit genomen; past perfect of verb 'innen' = to take possession of

Posted 17 May 2012 - 01:43 PM
There have been many examples where the Westfrisian dialect (sometimes that of Texel) offers better explanations for OLB-words than known (Old-) Frisian. It might also be one of the reasons why some proud nationalist Frisians did not like the OLB, because it suggested that their dialect was actually not older than Dutch, just another variety of Old-'Frisian'. I have suggested before (like in my Frisones video), that the 'Fryan' Old-Frisian might actually more be Old-Westfrisian.

This map has been in my mind for a while.
Now I finally made it (using a reconstucted map of Roman times): 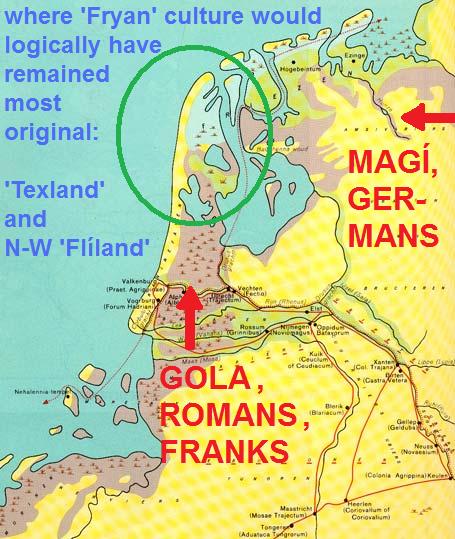 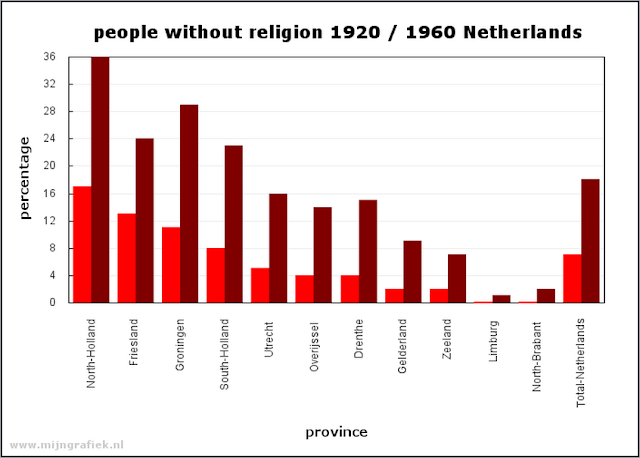 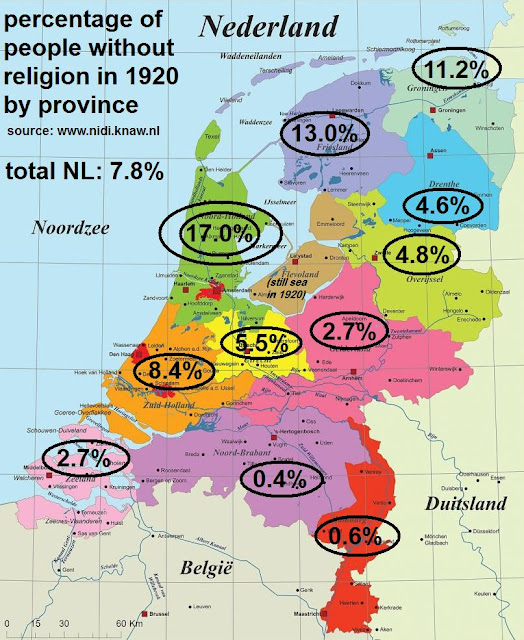 If Amsterdam and Haarlem (the biggest cities of North-Holland) would be left out, the percentages would have been higher.

These percentages clearly show that in 1920 the province North-Holland was least religious.This supports my theory that the original 'free-Frisian' (or Fryan) spirit survived more in North-Holland than in the province Friesland. It may also explain why the Over de Linden family moved from Leeuwarden (FRL) to Enkhuizen (NH). 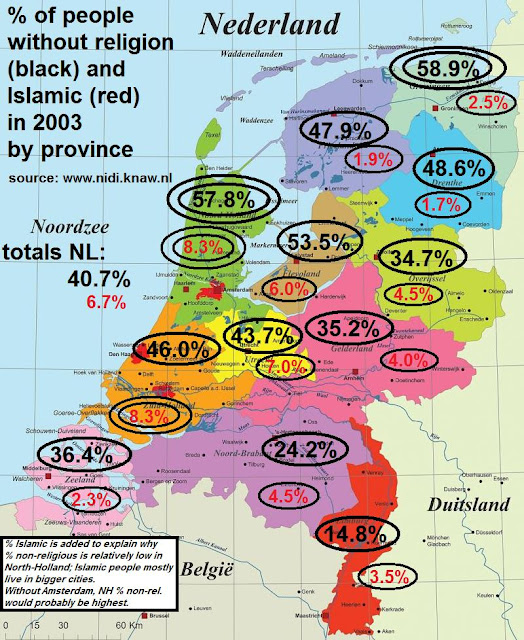 This does not take Judaism, Buddhism and other small (in NL) religions into account yet, but it gives an impression.

According to another source the % of people without religion in NL was in 2005: 48.4 %nl.wikipedia.org/wiki/Religie_in_NederlandFrom orthodox Protestant (Reformed) newspaper (31-08-2010):Ontkerkelijking in Nederland sterkst
DEN HAAG – De ontkerkelijking in Nederland is al een eeuw gaande, maar gaat nergens ter wereld zo snel als hier. Dat blijkt uit nieuwe cijfers van het Centraal Bureau voor de Statistiek (CBS).www.refdag.nl/kerkplein/kerknieuws/ontkerkelijkingTranslated:Deconversion (people losing their religion) strongest in the Netherlands
Deconversion in the Netherlands has been going on for a century, but nowhere in the world it is going as fast as here. New figures of the Central Bureau for Statistics prove that. 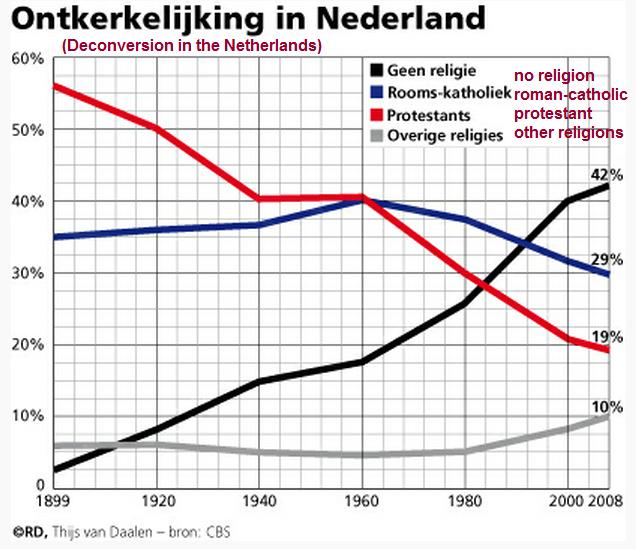 Conclusion:The Netherlands are ahead of the rest of the (western?) world with deconversion, and as I have shown, within the Netherlands this is the province North-Holland (Westfriesland), the area where 'Fryan' culture would logically have remained most original (more than in the province Friesland/ Fryslân), as it was more difficult to conquer by the Gola/ Kelta/ Romans/ Franks (from the south) and Magí/ Danes/ Germans (from the east).It will not be a coincidence that the utter north-west part of NL, Texel/ Texland (?), was the cultural/ administrative centre of 'Fryasland'.


Posted 20 May 2012 - 10:11 PM
In the following quotes, MÉID, MÉIDE, MÉIDUM is translated through the context.
I could not find a dictionary that has this word with a meaning like the ones used in the translations.
I suspect a relation to mead (Dutch: mede).

(Elsewhere in the OLB 'MÉID' means present/ gift. That meaning is listed in dictionaries, as well as various other meanings, but not 'tavern' or 'assembly'.)


Just like 'café' (coffee) became the word for the place where it is served (in nowadays NL 'coffeeshops' are places where people can buy and smoke cannabis and it has nothing to do with coffee anymore), 'MÉID' (mead) is used in OLB (appearantly) for a place where people come together to socialize.

The question is: did someone brilliantly make this up himself (him = neutral), or was this meaning of the word forgotten long before the first dictionaries were made?

(To me the answer is simple, because I have no doubts about OLB's authenticity.)


Quote
In case of Latin: what 'original' language could be that complicated?  It is of no practical use.
I agree.
Latin was a language designed to be written, not an oral language of the people.
The example of GÁRD, garden, giardino, jardin proves that Latin was a new language.
If it was really that old we would all be using varieties of HORTUS.
Even in Italy they say giardino. 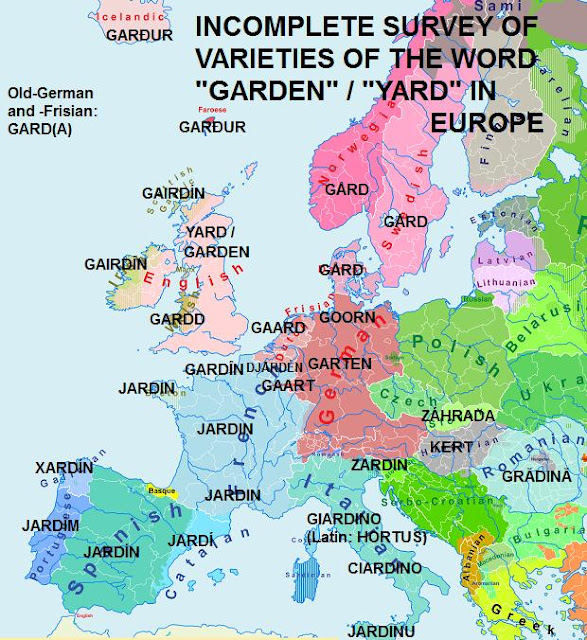 If it was a practical language that had evolved naturally, it would have stayed.
We would all be using it.

~~
Assuming that NYNDASK and NYN-DISK are varieties of the same word, it can be concluded that the translation was not consequent.

The term "nijdas" is known from oldschool Dutch in use for someone with a nasty character, and the word was associated with "hagedis" (lizard).
http://gtb.inl.nl/iW...emmodern=nijdas
http://www.etymologi...refwoord/nijdas

=> in these 3 texts the spelling is inconsequent

=> in this single text the spelling is inconsequent

A similar exercise can be done with (for example):

(For this analysis I used www.online-utility.org/text/analyzer.jsp and my transcription, which is a corrected version of Ottema's.)

No, we have not been here yet. We discussed the word AL-GÀTTAR, but not Á-DISK.

The following two fragments show that (like NYN-DISK) the word was not translated consequently by Ottema and Sandbach.

~
The Nethersaxon dialects still have versions of this word (with the -SK sound).

It is important to note that "DASK" and "DISK" are not listed in Halbertsma's Lexicon Frisicum (A-F), which is strange if he would have written the OLB.

In fact, I have not found these words in any regular dictionary, Dutch or Frisian.
Still, the dialects speak bookparts.

It looks like the Dutch 'hage-dis' may originally have been 'hage-disk' or 'haag-disk' as OLB suggests.

That does not look older to me.
The most original version would logically be the most simple one.
(Just like GARD would be older than hortus, jardin, giardino etc.)

Abramelin, on 31 May 2012 - 01:57 PM, said:
To name something you use a couple of descriptive words. This description then becomes a name, and names (and words) tend to shorten in the course of time.

Yes in those cases that is true, but if GARD is from the verb GARA (which I think is likely), than that is the most simple, the most pure form.
I will think of more examples.

The Newfrisian 'wyn' and 'lân' for 'wind' and 'land' are shorter, but newer spelling varieties.