In the language of the Oera Linda Book, the word TWISK means "between".
The land east of 'Fryasland', in between the Fryas and the Findas, is called TWISKLAND.

Fact 1: "twisca" in oldfrisian meant "between"; Dutch: tusschen => tussen.
Fact 2: "betwix(t)" in old- and middle-english meant "between"
Fact 3: in Danish, Swedish, Norwegian, Faroese and Icelandic, the name for Germany is (varieties of) "Tyskland" (which in Dutch would be spelled "Tuuskland").
Fact 4: Only in German and Dutch, the name for Germany is Deutsch- or Duitsland; in the rest of Europe, other varieties are used (mostly based on GERMAN or ALLEMAN; see picture). 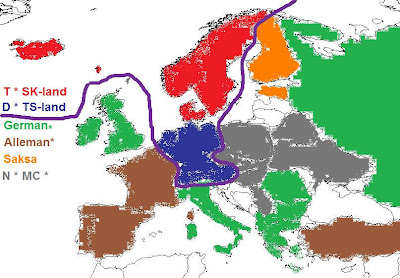 Question:
What is more likely to have been the original sounds:

Note that in oldschool Dutch, "Duitsland" was spelled "Duitschland" (more like German "Deutschland") and that "sch" is a softer form of "sk".
at 10:30 No comments: