with English subtitles by me
at 11:23 No comments:

HEL is really CLEAR, even Sandbach has this word, Nyhellenia lent new and clear counsels.
HEL.LICHT clear light ie; the purest form
So I'm not too sure about your literal translations there..

Its not that it doesn't make sense PT - the word hell/helle for light and clarity is not Frisian. That's what no-one seems to be getting. Find it in the Frisian dictionary.

When interpreting the OLB, one cannot rely on Oldfrisian dictionaries exclusively.
Sometimes Oldgerman, Oldnorse, Olddutch etc. (which are not all that different anyway) come to help to make more sense of it.
Sometimes one can only translate by considering the context.
Whe have had dozens of other examples of this.
###

... I asked you what your translation of BI HELLE DEI was ... HELLE NACHT

Sandbach is a translation of Ottema's translation, not of the original text.

Like Ottema, I would translate as "heldere dag" en "heldere nacht", still common expressions in Dutch, meaning clear in the sense of cloudless.

you and Abe and others are seemingly insistent on using Dutch or French borrowed words in many instances, such as this example for one...

I didn't use any French borrowed word.

And Dutch is just a variety of 'new Fryan', like German, Norse, Frisian, etc.
No coincidence that it is spoken in the same area as where the OLB describes as being the Fryan main homelands (Texland, West-Flyland etc.)
###


Posted 27 May 2015 - 10:12 AM
The focus has been much on the language of the OLB in general and on individual words and their etymologies.
Also, we have explored archaeological material and other sources about the same area.
And I have translated texts about the OLB from Dutch and German into English.

This morning I thought of the first two pages, the copyist letters by (1) Hidde and (2) Liko 'Oera Linda' (Over de Linden).

They both describe a problem and a solution.
1. the information carrier does not last (paper decays in wet climate) ==> keep making copies
2. the information is sensitive and agents of a conflicting, dominant belief system will want to destroy it (Christian monks) ==> hide and protect it carefully

This is an example of how the various texts can be analysed.

The part that follows, with Adela's plea, contains some interesting themes, leading to the conclusion to collect various texts into what became the OLB.

What are these themes and how do they relate to our times?
###


Posted 27 July 2015 - 10:15 AM
Much of Fryan culture (and language!) lives forth in various known traditions but all that is explained away as inspiration for the alleged 'fabrication'.
Burghs were already destroyed by enemies between 600 BCE and ca. year 0, as described in OLB, so it's nonsense to even suggest that any building would be left.
Most buildings will have been of wood anyway, and stones may simply have been re-used.
In the 13th century Floris V count of Holland built a castle in the village where I was born Wijdenes, and not a trace of it can be found today. They still have no clue where exactly it was located.
###

... if it is the genuine 13th century manuscript, then carbon 14 dating ought to easily verify that age.

Indeed. Yet the archive never had such a test done.
They refuse to even consider the posibility that it is authentic and still have not determined where and when the paper was made.
That should be dead simple with modern techniques.

Your position then from "paper gate" is that the OLB is real/authentic?

These are just 3 different spellings of exactly the same name.
They may even have been pronounced the same.
(Texel is pronounced Tessel in the NL)
###

The reason was not parentage or skincolor. They would not even take back those of their own blood, after the latter had been culturally corrupted.

But nor the first (the daughters), nor the second (the sons) may come back.
For they would bring foreign morals and habits with them

The 'Fryas' mostly detested slavery, while most other cultures had slaves or masters. That is the main thing they wanted to remain free of.
###

The Findas were seen as irredeemably tricksy, were they not?

By some, but not by others.

Minno (Sandbach p.59):
I will conclude this history by saying that we must not have anything to do with Finda's people, wherever it may be, because they are full of false tricks, fully as much to be feared as their sweet wine with deadly poison.

Minerva (p.101):
the carrier must make five thousand revolutions of his Juul before Finda's people will be ripe for liberty.

Apollánja's book (p.155):
The Lydas people and the Findas people will exterminate each other, and we must people the empty countries.

Déla Hellénja (p.191):
But when the priests fancy that they have entirely extinguished the light of Frya and [Jes-us], then shall all classes of men rise up who have quietly preserved the truth among themselves, and have hidden it from the priests.
They shall be of princely blood of priests, [slave peoples-], and Frya's [i.e. free peoples-] blood.
They will make their light visible, so that all men shall see the truth; they shall cry woe to the acts of the princes and the priests.
The princes who love the truth and justice shall separate themselves from the priests; blood shall flow, but from it the people will gather new strength.
Finda's folk shall contribute their industry to the common good, Linda's folk their strength, and we our wisdom.
Then the false priests shall be swept away from the earth.
Wr-alda's spirit shall be invoked everywhere and always; the laws that Wr-alda in the beginning instilled into our consciences shall alone be listened to.
There shall be neither princes, nor masters, nor rulers, except those chosen by the general voice.
Then Frya shall rejoice, and the earth will only bestow her gifts on those who work.
All this shall begin 4000 years after the submersion of Atland, and 1000 years later there shall exist no longer either priest or oppression.

... your use of the old addage "cultural marxism" which I have only seen on Neo-Nazi boards.

I wonder what you were doing there.
One could even pick up such a term when 'innocently' browsing those boards.
I got familiar with it on Red Ice Radio.
It perfectly describes the globalist transformation into a more easily-controllable monoculture.
###

Why wouldn't they think they were better than the others?
... the Fryans were racist. ... it makes them the average human culture.

I don't believe at morality is tied to race, no.

Still, you believe your morality is superior to that of "nazis" and "racists", terms heavily emotionally charged by decades of Hollywood (antigermanic) propaganda.

The terms are associated to genocide, to pure evil, similar to the words "witch" or "heathen" a few centuries ago.

Back then it was propaganda by the church against people who did not comply to the mainstream belief or held on to older beliefs.

Result: the burning of these 'heretics' alive with crowds of cheering people who were of "superior morals".

In our time the words "racist" and "nazi" are used against white people who want to preserve their culture and heritage, who don't believe in the globalist agenda (aiming at a one-world government, ruling a monoculture). It is hypocrite, for occupied Palestine is allowed to create a racially slash religiously 'pure' state by genociding the native population and only allowing other 'chosen ones' in.

If an individual like yourself can believe his morals are superior, then so can a group of people, a family, tribe, nation or race.

Whatever minor internal prejudices I have are... Well minor as compared to the Oera Lind Book.

L.O.L.
You obviously would not be able to see how major they actually are.
###

Except the Romans were fine with incorporating brown and swarthy folk of Lyda and Finda.

As long as they could use or control them, to increase their wealth and power.
###

The Oera Linda book does not describe races. It describes three populations that descended from three different superwomen: Lyda, Finda and Frya, ... These populations were (Indo)-European populations, therefore Caucasian populations.

How do you explain this description of the three mythical mothers (Sandbach p.13-17):

Lyda was black, with hair curled like a lamb's
...
Finda was yellow, and her hair was like the mane of a horse
...
Frya was white like the snow at sunrise, and the blue of her eyes vied with the rainbow.

For more about black/ brown and yellow/ light-brown and the peoples of these colours as described in the OLB, see blogposts:

I was born and grew up in Den Helder, the town where the Oera Linda Book was first revealed to the world.

Nice.
I was born and raised in Westfriesland, in a village close to Enkhuizen, where the OLB was kept until Cornelis got it in 1848. The naming after haircolor is known to me.

You are the first and only as far as I know with this interpretation, but it is far fetched IMO.

Black Adel was indeed named so for his hair colour:

19 [196/06]
MEN JETA SWARTER AS SIN HÉR IS SINE SÉLE FVNDEN
Maar nog zwarter als zijn haar is zijn ziel bevonden.
But yet blacker than his hair, his soul was found.

But Lyda's Land must be Africa, as is clear from the context. Here's a few fragments but I could give many more:

If your interpretation would be right and the Finda's had "yellow" hair, that would mean they are blond. ("Geel" used to mean blond in context of hair.) Consider this: 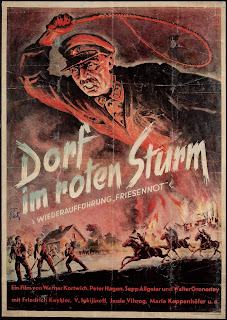 
According to the Skanda Purana, the sage Bhrigu came to Bharuch sitting on a tortoise. The tortoise is known as Kachchha in Sanskrit. Hence the place was named 'Bhrigukachchha'.
Another theory states that the city derived its name from "Bhrigukachchha" (... "Bhrgu's riverbank"), the residence of the great saint Bhrigu Rishi. The city then became known as 'Bharukachch', which was later abridged to Bharuch.

In other words, the etymology is not known. It could easily have been BURCH (borough) originally. A word, very common in OLB.
at 18:50 No comments: