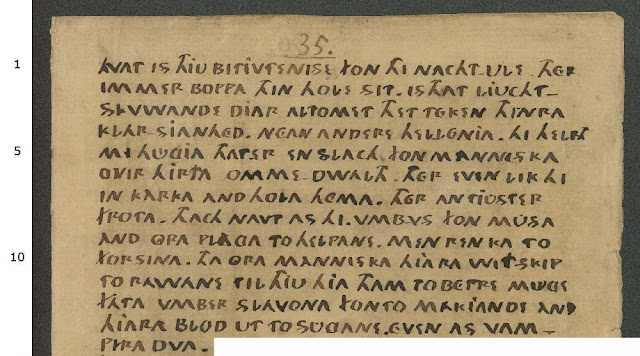 Years ago, I decided to never give this topic any attention, hoping that some day it would just disappear from the web. However, since it is still used to discredit the Oera Linda-book, I will now present some of the relevant facts.

The most important lesson I learned from my Oera Linda-book project may be, that even as a scholar in a dossier like this, one becomes part of what I termed the 'illusion of authenticity'. Most debates about the Oera Linda-book concern questions like 'true or false?', 'parody or serious?' and 'joke or crime?' Whatever position is taken in the debate, one becomes part of a strange knot of contradictions and possible reversals, in which all reasoning can unnoticed be turned around. This confusion is an inseparable part of the Oera Linda-dossier itself (perhaps because confusion is an inseparable part of our reality).

A fantastic example of this mechanism are the Daughters of Frya. My research had led me to this sect of young girls in white skirts. Rather than indulging in sex and alcohol, they had dedicated themselves to worship of Frya, the 'folk-mother' of all Frisians, according to the Oera Linda-book. Of course it is bewildering that an obvious mystification can lead to the foundation of such a New Age-like sect, but I mostly laughed. I thought it was very funny how these girls had chosen those white skirts as a uniform dress, because of the quasi-Old Frisian word tohnekka. That word was used for the 'tunics' that would have been worn by those old Frisian folk-mothers and burg-maidens. The word 'tunic' would – by means of a funny and fine folk-etymologly – have been derived from tohnekka: dress to the neck.

Based on what I later found on the internet, I concluded that the sect was based near Sydney. I got further confirmation on an Australian christian site, where a father complained how this sect had alienated his daughter from him. Of course I tried to contact the cult leaders, but as a man they would not have a chance. According to principles of Oera Linda-book, my male breath would immediately have contaminated the sacred fire of this little matriarchal society.

Reports appeared on the web some years later, that the sect itself would also be a parody, just like the Oera Linda-book. The name Tony Steele was mentioned, author of two books about witches. The girls on the photo would actually have been members of a tennis team. This suddenly no longer seemed implausible. In the meantime, all this was erased from the web again.

This leads to the – preliminary – conclusion, that the tohnekka is a great example of a phenomenon which is often too easily overlooked, namely that much of the 'brown' [i.e. Nazi] pre-war ideology was happily redressed into a fresh New Age tunic, marching on after the war. 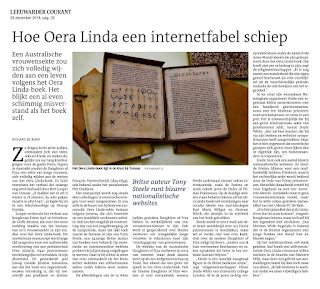 
The following fragments - in order of appearance in manuscript - are relevant for reconstruction of chronology. (More fragments will be added, as well as discussion.)

15b2. Yesus or Buda of Kashmir
[136/08] 16 WÁRA 100 JÉR LÉDEN IS ÁTLAND SVNKEN. ÀND TO THÉRA TIDUM BÉRADE THÉR AWAT HWÉRVPPA NIMMAN RÉKNED NÉDE.
It was sixteen hundred years since Atland sank, when something happened that no one had expected.
(Literally: ‘16 Times 100 years ago Atland has sunk, and in those times something happened that no one had expected.’ — It would not make sense when this ‘something’ happened when Atland sank, because all dating is relative to the sinking of Atland. It would simply have been: ‘When Atland sank...’.)
(2192* - 1600 = 592 BCE) *see A

Note to B. Liko Ovira Linda
It is remarkable that Liko writes "they want to obliterate all traces of our ancestral heritage" and yet dates his writing by referring to the year in 'KERSTEN' reckoning: 803, rather than using the system 'after Atland sank'. Had the latter system already gotten out of use? In that case, how trustworthy is the key provided by Hidde on page 00a, using both systems (1256 KERSTEN and 3449 ÁTLAND)? If Yesus/Buda is the same as Buddha, than ca. 600 BCE seems to be right. Also, if Friso's fleet arrived ca. 300 BCE, then this corresponds with the conventional dating of Alexander the Great.
On the other hand, there are good arguments for theories in which the first millennium was in fact considerably shorter than 1000 years (at least 300 up to perhaps 700 years). See for excample Toronto 2016 lecture by dr. Gunnar Heinsohn and listen to the 1 hour interview in German of dr. Herbert Illig.
at 21:26 No comments: