Abramelin, on 01 June 2012 - 04:57 PM, said:
The OLB manuscript was originally thought to have been written in Old Frisian but according to Jensma "the syntax of this artificial language proves to be completely in line with modern, read: nineteenth-century Dutch/Frisian"

Jensma is not completely sure that OLB is a hoax.
He addmitted so himself, I have quoted him on that earlier.
Therefore, it is not sure that the language is artificial.
Thus, the obove quote is wrong.

"The syntax of modern Dutch/ Frisian is in line with the language of the OLB."

We only have a few written records  from late-medieval monks, who were Latin schooled. They will not have been Westfrisians, as the Westfrisians hated the church and everything having to do with it.

In North-Holland/ Westfriesland/ Texland (Texel) the original Fryan culture and language may have been well preserved, transmitted from mother to child (hence mothertongue; moedertaal; memmetaal). The people from this area will have had much influence on Dutch culture, otherwise we would by now be speaking French, German, Danish or English. Our language, syntax and vocabulary must be deeply rooted in our culture. While men usually travel around, going to wars, exploring, trading etc., women usually stay home (unless they are kidnapped, sold, traded or if they really have to escape when driven out of their land.) In peace-minded cultures, children are raised mainly by their mothers. In war-minded cultures, the sons get military schooling (by men who will often be from different areas) from young age. So language stays most pure in areas where mothers raise and educate their children.

Think about that one for a while.

Westfriesland (and Texel?) were subdued for the first time (as far as I know) by the counts of 'Holland' (a term introduced in 1100 to replace 'Frisia') in the late 13th century.

We have to ask this question:

Is it possible that OLB and its language are authentic?

YES, that IS possible.

Abramelin, on 01 June 2012 - 04:57 PM, said:
The OLB manuscript was originally thought to have been written in Old Frisian but according to Jensma "the syntax of this artificial language proves to be completely in line with modern, read: nineteenth-century Dutch/Frisian"

Besides that it is not sure that the language is 'artificial', there is more wrong with this quote.

The syntax of the OLB-language is as much in line with the syntax of late medieval Oldfrisian (from the well-known laws) as it is with that of 19th century Dutch/Frisian.

Jensma's "read: nineteenth-century" is suggestive, one might even say demagogic.

He wants the reader to believe something that he could not prove.

Otharus, on 02 June 2012 - 12:19 AM, said:
In North-Holland/ Westfriesland/ Texland (Texel) the original Fryan culture and language may have been well preserved, transmitted from mother to child (hence mothertongue; moedertaal; memmetaal).
...
So language stays most pure in areas where mothers raise and educate their children.

We usually learn the basics of our language (and ethics) from our mother.

Before there was television and radio, and when people usually did not go very far from home, children will only have heard the language of their familiy and village members. (In cities even neighbourhoods would have their own particular accent.) Education by the parents and family was more important than in the last few generations.

Since I collected data of my ancestors a long time ago, I could easily do a case-study, making visible the spread of six generations of mothers. As you can see almost all of them were born in Westfriesland. Only four were born a bit more south, but still in the province North-Holland (between Amsterdam and Westfriesland). 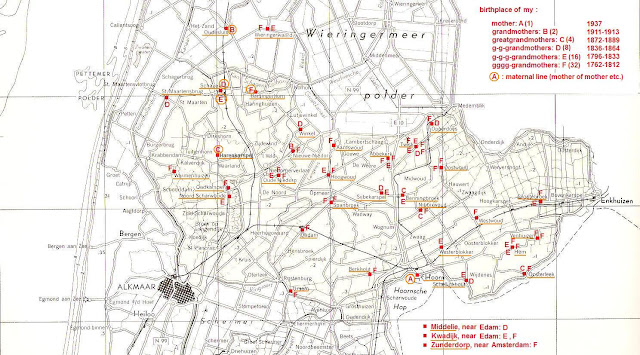 I have read witness reports from the early18th century, they give a good impression of spoken language as the notary would literally quote the witnesses. Apart from a few words that are no longer used, language (syntax) has not changed a bit.

Between 1700 and now the language of my ancestors has hardly changed, and they did not migrate much.

I can imagine that in the preceding centuries changes happened even slower.
Communication was much more oral than now.
Because common people were hardly reading, the brain had much more space left for speaking and listening (and singing

).
I also think their vocabulary was much better than ours.
at 14:31