Translation of frontpage article (underlinings added by me):

Dutch language is much older than ´olla vogala´
['all birds'; a famous love poem, supposedly written by a Westflemmish monk in the late 11th century]

By the editorial office 'Science' (Rotterdam)

The Old-Dutch language is much older than the words in the well-known sentence 'Hebban olla vogala nestas hagunnan hinase...'. 350 words of 500 years older can be labelled as old-Dutch. They are reconstructed from copies of a sixth-century lawtext, the Lex Salica.
In the course of centuries many copies of that text were made and the copyists did no longer know how to deal with the Netherfrankish words. Those words were changed, made into Latin-ish or Greek-ish words, or simply left out.
Now they have been reconstructed and included in a new edition of the Old-Dutch Dictionary of the Institute for Dutch Lexicology. It is online on www.inl.nl.
They are not only strange words, like 'andarstrippi' and 'heemheto' (see examples). Words like 'morther' (murder), 'fither' (four ~ Dutch & German: vier) and 'focla' (bird ~ Dutch & German: vogel) sound more familiar.
The original Lex Salica was written in North-France, where Netherfrankish was spoken. "That language", editor of the dictionary Arend Quack explains, "was definitively superseded by the Roman language in the seventh century". The Lex Salica was written in Latin, but to clarify the juridical text, many words were added from the spoken language of that time.

[examples (separating dots added by me):]
andar.strippi someone else his land
brio.ruoro index finger (literal: to stir porridge/ mush)
ferth.bero a bringer/ barer of severe danger
fri.fra.sagin to end an engagement with a woman
heem.heto the main (breeding) bull/ steer

[continued in article from page 18] 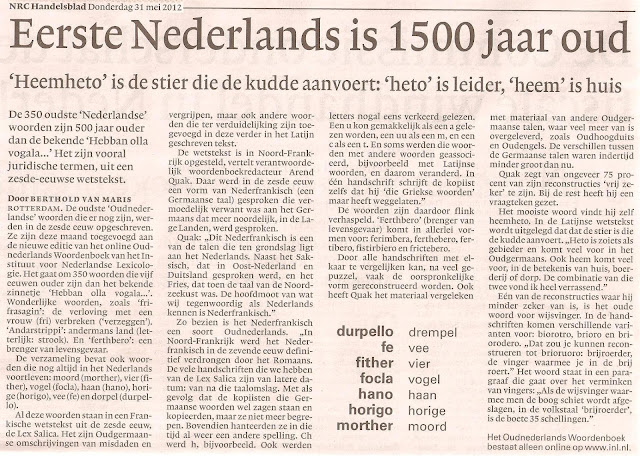 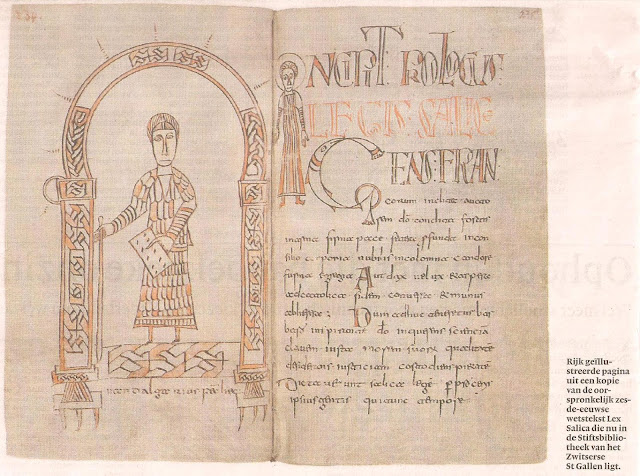 Translation of main article (underlinings by me):

First Dutch is 1500 years old
'Heemheto' is the bull that leads the hurd: 'heto' is leader, 'heem' is home

The 350 oldest 'Dutch' words are 500 years older than the well known 'Hebban olla vogala...' They are mostly juridical terms, from a sixth-century law text.

The oldest 'Olddutch' words that are still used, were written in the sixth century. This month they were added to the new edition of the online Olddutch Dictionary from the Institute for Dutch Lexicology. They are 350 words that are five centuries older than the well-known fragment 'Hebban olla vogala...'. Odd words, like 'frifrasagin': to break ('forsay' ~ Dutch: 'verzeggen') the engagement with a woman ('fri' ~ Dutch: vrouw). 'Andarstrippi': otherman's land (literally: strip). And 'ferthbero': a bringer/ carrier of severe danger.
The collection also contains words that still live forth in the Dutch language: moord (morther = murder), vier (fither = four), vogel (focla = bird), haan (hano = rooster), horige (horigo = slave), vee (fe = cattle) and dorpel (durpelo = doorsill).
All these words were used in a Frankish law text from the sixth century, the Lex Salica. They are Oldgermanic descriptions of crimes and misdemeanors, but also other words that were added to clarify the Latin text.
The lawtext was composed in North-France, Arend Quak -main editor of the dictionary - explains. A kind of Netherfrankish (a Germanic language) was spoken there in the sixth century. This language was probably related to the Germanic that was spoken more northerly, in the Low Lands (Netherlands).
Quak: "This Netherfrankish is one of the languages that are the foundation of the Dutch language. Besides Saxon, that was spoken in the East-Netherlands and Germany, and Frisian, which was the language of the Northsea coast. The main part of what we know as Dutch nowadays, is Netherfrankish."
Thus, Netherfrankish is sort of Old-Dutch. "In North-France the Netherfrankish language was definitively superseded by the Roman language in the seventh century. The many handwritten copies of the Lex Salica that we have are of later date: from after that change of language. As a result, the copyists read and copied those Germanic words, but they no longer understood them. Furthermore, in that time they already used a different spelling. 'Ch' became 'H', for example. Also, letters were sometimes mis-read. A 'u' could easily be read as an 'a', a 'uu' as an 'm', a 'c' as a 't'. And sometimes these words were associated with other words, like with Latin words, and changed accordingly. In one manuscript, the copyist even writes that he simply left out 'those Greek words'.
As a result, the words were quite mishmashed. 'Ferthbero' (carrier of severe danger) was found in many varieties: ferimbera, ferthebero, fertibero, fistirbiero and frictebero.
By comparing all copies, after much puzzling, many of the original versions could be reconstructed. Quak also compared the material with sources of other Oldgermanic languages, of which much more survived, like Oldhighgerman and Oldenglish. In the past, the differences between the Germanic languages were less significant.
Quak says that about circa 75 percent of his reconstructions, he is 'quite certain'. To the other part he added a question-mark.
His favorite word is 'heemheto'. In the Latin text this is explained as the bull that leads the hurd. "Heto is something like commander and is common in Oldgermanic. Heem is common too, in the meaning of home, farm or village. The combination of those two was a big surprise to me."
One of the reconstructions that he is less certain of, is the old word for indexfinger. The manuscripts have many varieties: biorotro, brioro and briorodero. "One might reconstruct that into 'brioruoro': 'brijroerder' ('brew-churner'); the finger that is used to churn or stir the porridge or mush." The word is used in a paragraph about the mutilation of fingers: "When the indexfinger, used to shoot with bow and arrow, is chopped off - in the folktongue 'brioruoro'- the fine is 35 shillings."

You still think they were different languages?!
There must have been dozens of dialects of the same language (whatever you want to call that language) all over NW-Europe.

"In the past, the differences between the Germanic languages were less significant."

What is important, is that after a few hundred years of 'Dutch' linguistics, they finally accept that "Hebban olla vogala..." is not the oldest known source of our language.

{Note: I later learned that the "vogala" poem was discovered in 1932.}

Something many generations (including both of us) learned at school.

This was one step.

The step towards accepting the OLB as a serious source is made slightly easier now.

Abramelin, on 01 June 2012 - 04:26 AM, said:
And I posted a text (from the 6th or 7th century AD, found in the province of Friesland) written in runes that didn't resemble anything in the OLB, but it sure as hell was old Germanic, a language that should have been very close to Fryan.

For someone who calls himself a skeptic, you are too sure of things.

What are you talking about anyway?
'Old Germanic' IS very close to 'Fryan'!

Abramelin, on 01 June 2012 - 10:58 AM, said:
But not the language they found used on that wooden tablet. It was written in runes, and the language did not resemble the Old Germanic or Old Frisian we know of, or the language used in the OLB.

Conclusion: the language of that wooden tablet was not Old-Germanic or Old-Frisian.

Abramelin, on 01 June 2012 - 02:24 PM, said:
Those Frisian Law Texts are from the 13th and 12th centuries; the runic inscriptions from Westeremden are from the 8th century.