Important source to be analysed: 1934 letter by Hajo Last

Almost nine years ago, at the Westfrisian Archives in Hoorn, I copied an article and a letter to the editor of the Enkhuizer Courant, the first published January 6, 1934, and the latter written that same day and published three days later (Jan. 9). The letter in particular, written by Hajo Last, is of high relevance and I have referred to it several times earlier, most elaborately in a blog post of Feb. 2018.

Now the texts have been scanned, digitized and translated into English so we can analyse them.

Note: the January 9 letter to the editor (Het Vrije Woord) continued on the next page, but was not copied by me as it seemed less relevant at the time (and copies were expensive). It contained some information about Enhuizen and the name of the author: Hajo Last, (living in) Bussum. It is this letter which is most relevant. The other article is added mainly to show the wider context; it was this article that moved Hajo Last to reply.

Reshaped for screen and transcribed 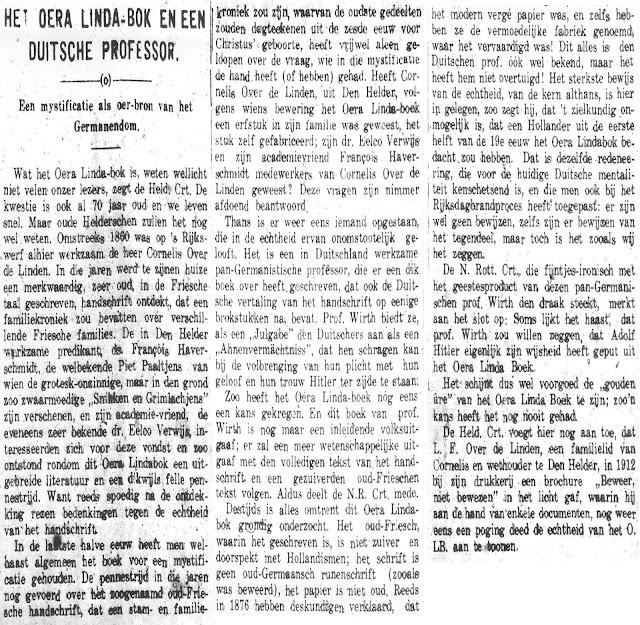 The main reason for Hajo Last to write his letter to the newspaper was not anything related to Herman Wirth though, but the claim that the manuscript would have been created by Cornelis Over de Linden in Den Helder. Last provides two accounts that suggest Cornelis got it from Enkhuizen. This is what we will focus on now.


2. letter by Hajo Last under the rubric "Het Vrije Woord"

Underlining and note numbers [x] by me.

[1] Hajo Last was born 1850 in Enkhuizen where he later married in 1876 (see genealogy). He was indeed drafted into the navy ('zeemilitie') on May 3, 1870 (militieregisters.nl).
[2] Cornelis Over de Linden was born 1811 in Enkhuizen; after his marriage in Amsterdam 1833, he moved to Den Helder ca. 1834-1835, where he lived till his death in 1874 (see genealogy).
[3] Cornelis' mother Anna Goemaat indeed lived at the Breestraat (at least) when she died in 1874, aged 90 years old; her death was reported by Hayo Last and his father Klaas Speleveld Last (see plate 4 here); The Last family indeed lived at the Breestraat (at least) when their five youngest children were born (1848-1860); the birth of their youngest son Jan (1860, Sept. 14) was reported by Adrianus and Bartholdus Over de Linden; The Bus family indeed lived at the Breedstraat (population registers 1890-1921);
[4] Cornelis was indeed her only child as a younger sister lived half a year only and an older sister must also have died young as no trace of her was ever found besides her baptism registration. Her husband Jan Over de Linden had died at sea in 1835 at age 50, when Cornelis was 24 years old (see genealogy).
[5] Two of his ship models (dated 1836-1842) are in the Rijksmuseum collection (see here).
[6] This version of Cornelis' story differs somewhat from other versions. According to Cornelis this visit had taken place in 1848 and it was given by his aunt (the widow) Aafje Reuvers-Over de Linden, the mother of Cornelia Kofman-Reuvers (who was not widowed until 1861). Cornelis was indeed the heir, since his father Jan only had one brother Pieter who had died in 1819 leaving one daughter only, one year before Cornelis' grandfather Andries died. Since Hajo Last remembers rather vividly, he will have heard it after 1862 (age 12) and it may even be as late as the early 1870's (Cornelis died 1874). A possible confusion between the mother and daughter widow would be forgivable.
[7] Hendrik ('Hein') Kofman, carpenter, born Feb. 11, 1853 and died Jan. 15, 1833 Enkhuizen, married 1875 Cornelia ('Kee') Watering (see genealogy).
[8] This is the key phrase of the whole text. It seems highly unlikely that Hajo Last would have invented this himself. Kofman was not born yet when Cornelis received or took the manuscript, but this is what he will have heard about it. If Cornelis created the manuscript together with accomplices - as is the authorised theory - or if it was given to Cornelis - as is his version of the story - it would not make sense for the Kofman family to talk about the MS having been 'stolen' by Cornelis.