Reconstruction of words in RUN-script OLB (from page 46). 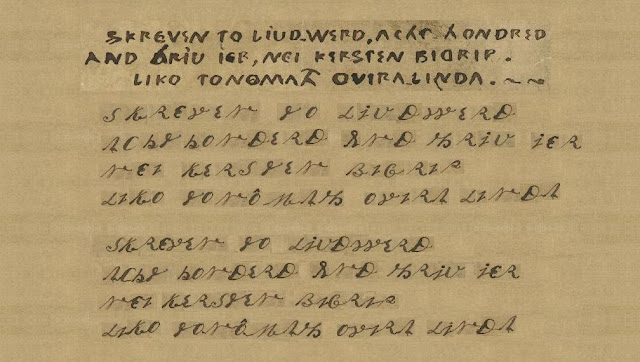 The "run"-script has always been considered as typical 19th century, but this is not at all evident.

Specially the F is not like any Dutch handwriting I have ever seen.
It actually looks more like a Greek Phi.

For some letters it is obvious that they look like the Greek version, for example, K, U and T.

But if you have a better look at the L, you can see how it may have evolved (through the 'run'-version) into the Greek Lambda. 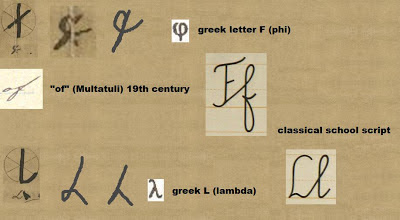 This trick does not apply  for all letters, but that it does for some of them is, at least, remarkable.

Edit: after I posted I noticed that the Greek L is a mirrored version of the L that I made, based on the run-L (which is like the traditional capital L). 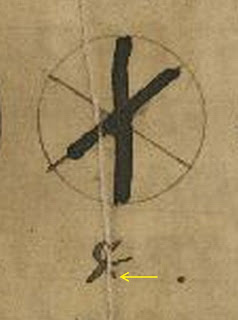 How do you interpret that dot?
Do you believe it is part of the letter?
How would you reconstruct the letter?

Can you make a drawing of what you think it should be? 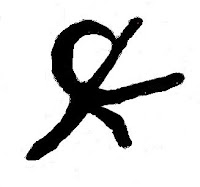 I know it looks like sh1t, but either the one copying the MS had some problems with his quill, or this is how the letter should look.

Otharus:
The whole point about the RUN-script is that one can write fast and keep the pen on the paper as much as possible, so the ink can flow gently without making a mess. You will know if you have ever written with a dip-pen.

So I think your first guess is the right one, as this makes most sense IMO:

(in the last one I have exaggerated to make the direction visible)
at 23:34