On page 120, Fréthorik Oera Linda introduces the report of Ljudgért, describing how king Alexander hired the service of Frya navigators and how a fleet eventually migrated back from India and Greece to the land of their forefathers (paragraphs 14d1-d2): "Liudgerd, the rear admiral of Wichard, became my ally and later my friend. From his diary I got the following history";

Later, on page 163, Fréthorik's son Koneréd adds a text (par. 16d), suggesting it was written by the same Ljudgért: "Among my father's papers, I found a letter, written by Liudgerd the Gerdman. Omitting some parts which only concern my father, I put the rest to good use here."
However, style and spelling of the two texts are significantly different, which will be demonstrated below.

1) spelling differences and sometimes a common word that does not exist anywhere else in the OLB (WELKE/-A): 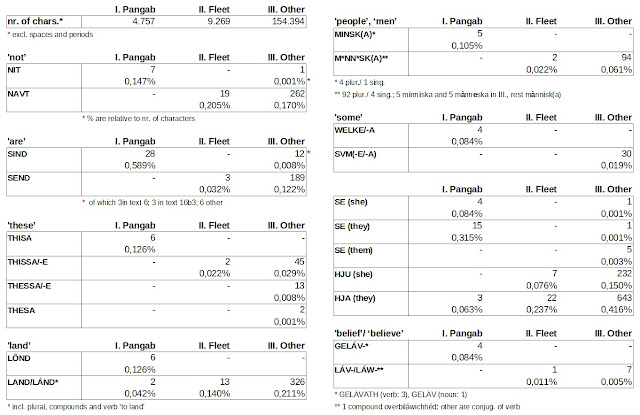 2) relative to number of basic sentences (units), I. 'Pangab' has of all samples:
[graphics showing deviation from average of samples will be added]
[discussion will be added]
at 22:57