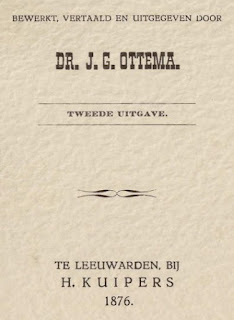 ... can now be searched through and copied from!

Oera Linda researchers who know (some) Dutch, will want to have access to the second Dutch edition (1876) of Dr. Ottema's Oera Linda translation. They will probably have found the version on the 'Gutenburg' website, but as I pointed out earlier, this is NOT the full 1876 edition, although it suggests it is. The translation and transliteration it contains are the 1872 (1st) versions and one of Ottema's essays (about page numbering) is missing (accessible here).

Earlier I made available a scanned version (PDF) of a 1971 facsimile reprint of the 1876 edition.

Now, the full text is also made available digitally (through OCR and meticulously corrected), including notes about the most significant differences between the 1st and 2nd edition. Note that it was the 1st edition Sandbach used for his English translation, thereby including many mistakes that were later corrected by Ottema.