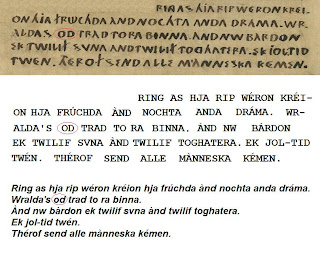 I have been fascinated with the word "OD" for different reasons, one of them being that it has been translated in completely different ways, from "hate" (Ottema) to "bliss" (Jensma).

Because most OLB-words that contain "od" are spelled with "oed" in modern Dutch (see below), I suspected that if the word "OD" had survived, it would now be "oed" or "oet".

From the context in which it is used, and because of the slang-word "oetlul" (as mentioned in the first quote), my thoughts have been that it means "penis" (I made a Youtube video about that).

Today, using a friend's dictionary, I found another word that confirms this idea:

oeteren (slang) = to piss (one of various meanings)

In oetlul you mean, but what about: oeteren = plassen (to piss)

And in OLB: "Wralda's od trad to ra binna"
(something penetrates women and then they become pregnant... what would that have been?!)

Thanks for the effort, but no, it doesn't make sense in the context in which it is used in the OLB.

In old-norse, "od" means spirit, and many old names seem to have derived from it:

Uther (Pendragon; father of king Arthur)
Od, Ódr, Odur, Odin, etc. (Norse mythology)
Ot, Otto, Otte (combinations like Odman, Odgar, Odwin, Edwin, Edgar, Edward, etc.)
Ott is a common family-name in Switserland, Austria, south-Germany; it must be really old, because the meaning is not known and yet it is a common name.

Abramelin, on 07 September 2011 - 07:56 AM, said:
One of the options you mentioned I actually thought of, but never expected you would come up with it

I know: Jan "met-de-korte-achternaam" (untranslatable)
I thought that was obvious...

Quote
And this one you have talked about, but not when it was 'invented':
The Odic force (also called Od [õd], Odyle, Önd, Odes, Odylic, Odyllic, or Odems) is the name given in the mid-19th century to a hypothetical vital energy or life force by Baron Carl von Reichenbach. Von Reichenbach coined the name from that of the Norse god Odin in 1845.
http://en.wikipedia....wiki/Odic_force

Indeed, if the OLB was created after 1845, the makers may have been inspired by Von Reichenbach for this word.

This again illustrates how Knul makes statements without doing his homework: 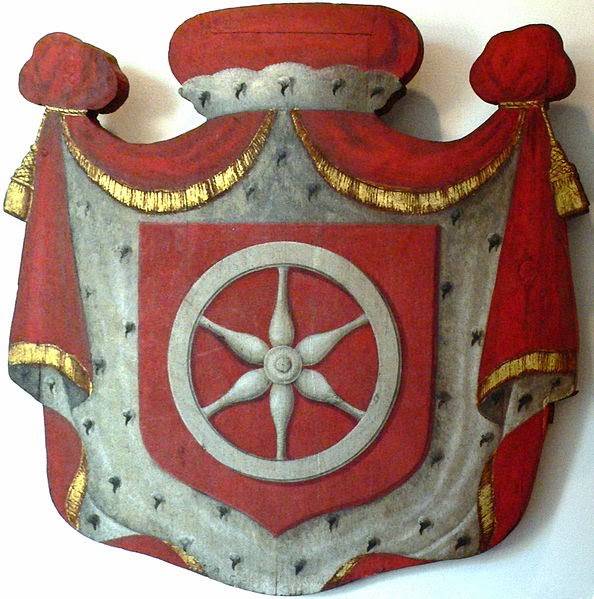 Abramelin, on 13 October 2011 - 10:45 AM, said:
I have been more specific; weeks ago I posted a translation of part of a Dutch pdf about Halbertsma and his love for the Frisian language.

And I have explained before why people who love the Frisian dialect have a problem with the language of the OLB:

Some words in OLB are more similar to Dutch, Flemmish, English, German and Swedish (or other languages), than to New-Frisian.

Nationalistic Frisians like to believe that their dialect is more original and pure than Dutch, while the truth is that it's nothing but an ennobled rural dialect.

Example: the city Franeker (from "Frana") is called Frjentsjer in their dialect.

This is why most members of the 19th century Fryske Akademy were horrified by the OLB (apart from the religious and political tension it would have created).

(The political goal of the F.A. was to promote Frisian contemporary culture and language.)

Otharus, on 14 October 2011 - 11:08 AM, said:
This is why most members of the 19th century Fryske Akademy were horrified by the OLB (apart from the religious and political tension it would have created).
(The political goal of the F.A. was to promote Frisian contemporary culture and language.)

Fryske Academy
The Fryske Academy is the centre of research on Fryslân (Friesland). It conducts research into the Frisian language and literature, the history of Fryslân, and present-day social and cultural trends.

The studies carried out by the Fryske Academy are typically comparative in nature: they compare the Frisian language and culture of past and present with the language and culture of other Dutch regions or other cultural minorities, in particular indigenous minority groups in Europe. In addition, the Fryske Academy also provides courses at the University of Amsterdam and Leiden University.
http://www.knaw.nl/P...GFuZz1FTkc.html

Abramelin, on 14 October 2011 - 06:44 AM, said:
The only other translation for Gosa Makonta is of course the one every Dutch person thinks of when s/he reads/hears the name...

Goffe Jensma (2004, p.137) points out that the name "Gosa Makonta" reminds of the Westfrisian (North-Holland) expresion "He is Geesje de Konte", meaning something like: He tastes defeat.

In "De Navorscher" of 1871 (p.152) the expression "Hij raakt Geesje de Konte" (he touches or strikes GdK) is mentioned (without being explained). 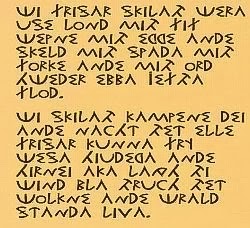 Nice try but it doesn't have spirit.
Nothing witty, poetic or provoking?
OLB is not about language only.
The humor, beauty and controversial content makes it worth studying,
whenever it was created and whoever were involved.

Abramelin, on 07 September 2011 - 02:38 PM, said:
I hope you have a peek now and then, Otharus, because I did find something about the name "Ott":
Otto, Ottens, Otte(n), Hoete, Otté, Ote, Oth(e), Ott, Ots, Ottes(en), Ottosen
Patronymic to the Germanic first name Otto, it is derived from the Germanic ot.
http://home.scarlet....loet/FpageO.htm

Ottens, Ots, Ottes(en) and Ottosen are patronyms, the others are not.
But, most importantly, the names are indeed derived from the Germanic "ot".

Quote
ot: wealth, inheritance, see od
od, ot, ôd, oda, odâl, odo, odela, otto, ôthal: paternal heritage, property, wealth, custodian
http://home.scarlet....rvloet/GERM.htm
So the name Ott does have a meaning, and it's based on the Germanic 'ot'/'otto'.
But it also doesn't make a lot of sense in the context in which it is used in the OLB.

The meanings "wealth" and "inheritance" are based on translations of certain texts that have survived.
I would like to know which texts they are and if other (better?) translations are possible.
It's not likely that these were the original meaning of such a short word.
The original must have been somthing more primal.

With the different translations of OLB's "OD" we saw how much depends on who the translator is, and even the same translator can change his mind later.

Quote
That's why I think 'od' must be seen in the meaning Reichenbach gave to it in 1845: vital energy or life force ..... and that would mean someone used that recent definition for 'od' in his creation of the OLB.

If the OLB was created after 1845 you would probably be right, but I would argue that Von Reichenbach chose the perfect word for his life force theory.

Remember the old-Nordic meaning of Od: spirit.
"Spirit" is virtually synonymous to "life force" (in my opinion).

Great Puzzler, we are thinking in the same direction.

Quote
As soon as they were full grown they took pleasure and delight in the visions of Wr-alda.
(His) Spirit found it's way among them.

In the original text, there is a point between DRÁMA ("dreams" or Sandbach's "visions") and WR.ALDA.S ("Wr-alda's").

There is no point between WR.ALDA.S and OD.
Since Ottema misplaced the point in 1872, translators up until Jensma have copied this mistake.

First breath after birth and impregnation are both relevant events in the beginning of a life, but they are not the same.

Since this thread started thanks to Alewyn's book, I think he deserves this review to be included here.
Source: http://www.amazon.com/Survivors-Great-Tsunami-Eurasia-Wednesday/dp/1451527748

I have only recently become aware of the existence of the Oera Linda Book, the account passed down for millennia regarding the Frisian civilization which greatly influenced the development of Western and parts of Eastern civilization. Because the book had been declared a fraud in error, serious scholarly inquiry into this matter has been nearly inaccessible up to the present time. What a strange fate and travesty that such an important part of world history has been practically ignored while fiction and myth has enjoyed a modern heyday.

Fortunately Alewyn Raubenheimer has taken to the monumental task of examining the Oera Linda Book not only in light of the contemporary archeological and geological discoveries and evidence which vindicate it, but in light of the historical references left to us from ancient writers like Homer and Herodotus, theological texts, and Neolithic ancient places. I had high hopes that this book would be the definitive scholarly resource for obtaining a true understanding of the contents of the Oera Linda Book itself, as well as be an entertaining, fascinating inquiry into ancient European history, and it did not disappoint. To read this book is to walk in a newly rediscovered ancient world and gain completely new understanding and insight to a part of history that is at once intuitively authentic. Passages from the Oera Linda Book which describe these free, noble seafaring citizens and their interactions and relations with early European, Mideastern and Asian civilizations are offered by Raubenheimer while he simultaneously provides the background information on the many ancient peoples the Frisians came into contact with. Maps and visuals are dynamically presented which not only clarify the revelations of the events covered in the Oera Linda Book but create all the more engaging of a read. It doesn't get any more incredible than a map of the now-submerged Frisland which matches the sea floor Northwest of Scotland.

Raubenheimer has also risen to the challenge of presenting the complex interactions of many ancient cultures that have each in turn left a formidable past in their wake. It becomes clear to the reader that history is not linear, but interdependent and dynamic, as resources, lands, language, knowledge and even genetics are shared during times of conflict brought on by geological catastrophes and war. Ultimately, I gained a tremendous admiration for the "Sea People" of antiquity that were continually referred to in epic works, sacred texts and ancient drawings alike. It seems then a tremendous loss that this imperative culture has diminished and nearly passed out of contemporary awareness. Their legacy, however, has been extensive. The only thing that would be truly unfortunate, then, is to for their legacy and heritage to not be included in the body of modern knowledge that is worth gaining in a lifetime. It is not only theirs, but ours. Thanks to Raubenheimer, we can claim it once again.
at 14:47