"doing my own research and making great discoveries"

Since almost 150 people have now pre-ordered my new English Oera Linda translation (approaching 250 copies), and many of them have trusted me enough to make a deposit, I think it is fair to — for a change — talk a bit about myself, insofar as this is relevant to the work I have been doing on this blog. The following was mostly taken from an interview I recently gave. 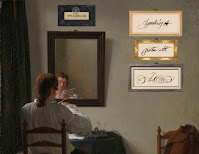 Born and raised Westfrisian, I am the father of four children below the age of seven. My wife is Prussian. We live in a village in the rural north-eastern Netherlands, less than a mile from the Frisian border, with woods on walking distance.

When fifteen years old, I was given an old family tree. After a few weeks of going to the archives myself, I was able to add an older (early 18th century) generation to it. By visiting distant relatives I also collected stories and very old photos. This was in the mid-eighties, long before the internet. These experiences of doing my own research and making great discoveries possibly taught me more than high school.

Twenty years later, I got interested in religion, mythology and our ancient ancestors, as well as the origin of our language. Searching for sources about the goddess Freya, I stumbled upon the Oera Linda-book. Its original language resonated strongly, provided many ‘aha’-moments, and I decided to try and understand every word of it. The most regular sources about the book felt suspicious, based on fallacies and bad reasoning. I recognized its significance, as the texts provided me so much inspiration and clarity of mind. To specialize in it and make it more easily available to a larger audience felt like a calling. I knew this could become a life's work, but since I became a father several years later, that obviously became a competing priority.

One of the many interesting and relevant conclusions we can draw from these texts, I think, is that our pre-Christian ancestors did not inevitably all believe in several gods and their tales, or worship various idols, but that at least a significant group may have had a much more advanced philosophy and culture. A general philosophy that actually still makes sense to us and that may indeed provide much needed guidance and inspiration to regain our strength and direction.

For now and the coming months, my main priority (after being a father) is to get the new translation out. This will be the first English translation from the original language. The existing one from 1876 by Sandbach was based on the first Dutch translation and begged for improvement. It is already possible to pre-order “Codex Oera Linda” and I will also open a fundraiser to support the Oera Linda Foundation which I have set up to publish and distribute the book, as well as possible future projects. When I have more time, I intend to record a reading of all texts in the original language, that is, my approximation of how it may have sounded, with subtitles and showing the original script. A German and Dutch edition of the Codex are contemplated.
at 11:30