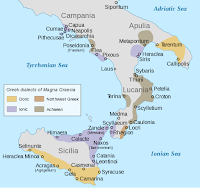 Additional information about ('near and far') Greece / Krékalanda:

Southern Italy used to be called Great-Greece (similar to Great-Britain versus Brittany).

Part 2/2: Four examples of discussion, about the Oera Linda-book

Alleged suicide of Dr. Ottema and his supposed reason for that; possible motives for cultural establishment to have silenced him and discourage possible followers.
Theoretical involvement of Joost Halbertsma and Ernst Stadermann in the alleged 19th century creation of the manuscript; some reasons why this is not plausible.
Wheel-based symbols; why it does not make sense that they were designed by an assumed 19th century forger.
Plausibility of overseas trade and contacts between Mediterraneans and Northern Europeans, long before our year zero.

(These videos were made as a reply to Johan Oldenkamp.)