In the first publication of the Oera Linda Book (1872 and 1876), translator Dr. Ottema made two big mistakes - in my opinion -, that were copied by Sandbach in his English edition (1876).

These mistakes are particularly curious, since the owner of the manuscript, Cornelis Over de Linden tried to prevent them in the correspondence they had previous to the publication.

1. Translation of "OD" as "hate"
2. Manipulation of the alphabet page

In their correspondence, Ottema and Over de Linden sometimes discussed parts of the translation, for example when Cornelis wrote (November 8, 1871):


You want to replace the word 'od' with 'animosity'. On page 128 I find FIAND for enemy. I would rather see you use 'fertilising force' - or a more appropriate term. The word animosity will cause animosity. [Ottema would later change 'animosity' in 'hatred'.] When one speaks to youths about love, they will fall in love. But when one speaks to them of war, they will separate in groups and play soldier, to the great pleasure of despotism.

In 1534 Martin Luther has used Odem for 'God's breath', which is what we might call life force. The old Dutch word odevaar for stork suggests a link with fertility. The Old Greek word ὠδις (ódis) can mean birth. In the Westfrisian dialect, oôt or oot is used for an indestructible weed (wild oat). All this supports Cornelis' suggestion to use something related to fertility or life force*.


* odd in Norse means point, tip, head, top, peak; odin means one (1) in Russian; in Dutch slang, oeteren is to urinate and oetlul is dickhead. Hod(e) is an old word for testicle. While 'life force' is a rather abstract concept, the simple, original meaning of od may have been penis. Indeed, that is what naturally has to enter a woman to make her pregnant.

But Ottema ignored this. He later wrote to Cornelis' son Leendert Floris Over de Linden (January 26, 1876):


Od (anger, rage, hate, animosity) trad to-ra binna, means that hate entered the hearts of the three daughters of Irtha [Earth]; this hate was obviously inherited by all of their descendants, and this is cause of the inborn, innate animosity specially in Finda's and Lyda's posterity against Frya's children. An animosity that will not end until the people of Finda and Lyda will be exterminated, and the people of Frya at the final victory will remain and inherit and possess the whole earth.
This animosity dominates all of history in the OLB and still goes on in our days. Frya's people pervade in all continents and establish European supremacy all over the earth. Everywhere the peoples of Finda and Lyda will have to submit or disappear.

Let us now look at the original fragment and how it appeared in the first Dutch and English editions:


(*) Wr.alda. Always written as a composite word, meaning: the over-old or most ancient one, the primal being.
(†) Od, root of Latin odi, I hate.

Which might be translated as (I would keep od):


Once they were ripe,
they got dreams of fruits and nuts (or: pleasure and delight).
Wralda's od (life force, seed or penis) entered them.

2. Manipulation of the alphabet page

In your translation I read: "Oh dear, never let the eyes of a monk gaze upon this script, they speak sweet words, but... etc."

From this fear of monks I dare conclude, that they had already captured many of our old manuscripts. I also dare believe that the Over de Lindens have not been the only ones, who possessed the book of Adela Follistar. When I follow the history of the manuscript, I dare assume that the Romans, the Phoenicians, the Greeks and all Mediterranean peoples learned the letterscript from us.

Not copied from the geometric lines of the Jol, but from less neatly produced Frisian manuscripts.

In the times when I tortured myself trying to read the handwriting, someone said to me that they might be Phoenician letters. So I looked for a book about the Phoenician language and found one with the title: "Paläographische Studien über phönizische und punische Schrift - Herausgegeben von D. Wilhelm Gesenius. Mit 6 lithographirten tafelen. Leipzig 1835."

The letters in that book are very different, but many of them are similar to the STAND and the RUN-SKRIFT as presented in the manuscript. Many or most of the prints of tokens with letters, depict women's heads, that reminded me of the Frisian honorary Mothers. The author says that every Phoenician colony had its own letterscript. But I could not follow him, because he compared the letters with Hebrew ones, which I don't know.

If my notion is right, we have been the lettergivers of all Mediterranean peoples. As the Nordic peoples always have been - and still are - the real sea dogs, the French with all their elevated theories not excluded, they were also most in need of letters and ciphars.

That the monks, who have invented their own letterscript, stifled ours to make it unreadable, lies in their nature. But who knows how many Copies of the book of Adela's Folstar remain here and elsewhere with kings or in Rome. Now that more than a thousand years have passed, they may have introduced the walking script as capitals, because they are similar to our capitals.

If you are so weak as to reject the walking script, out of fear for some barkers, than it is as if you want to duel with the sheath, while passing the sword to them.

For in the manuscript it says: "When Fàsta was Mother of honor, she made the running or walking script out of it. The Witking, that is sea king Godfried... etc." So, if the runscript was added more recently, then the above fragment was also added, and then anything can have been added. So I keep protesting against the mutilation.

In one of my videos, I also argue that the curly 'walking script' is in several ways completely different from the 19th century longhand and no reason to reject OLB's authenticity.

These are the alphabet and numerals in the original manuscript, pages 46-47: 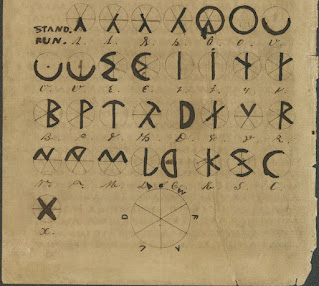 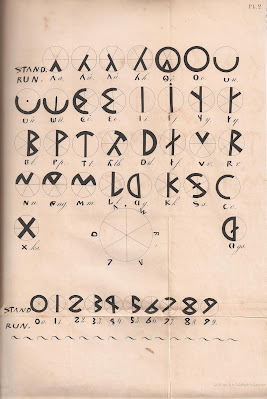 This created misunderstandings and played into the hands of critics. (I will try to find back examples and add them later.)
at 18:17