The Oera Linda Book has been discussed in a thread at unexplained-mysteries.com. From its start in June 2010 till now (March 7, 2016), there have been 18,609 posts. No definite proof for OLB being a19th century fabrication, or against its authenticity as a 13th century copy of older originals has been posted, so far.

Some of the most common arguments that have been given, will be summarised and refuted in this post:


1. A linguistic study would have proven OLB to be fake.

The main misunderstanding is, that language must have 'evolved' (or degenerated) in a linear or exponential way and that the oldest (accepted) sources are a reflection of spoken language. The development may in fact rather have been cyclic; After many wars, including the violent and destructive christianisation process, language might actually have regenerated, specially the written form. Words and expressions that may have been used in small circles only for a long while, may have become more common again later. Post-christianisation written language may in time have gradually become more a reflection of spoken language, rather than a Latin inspired attempt to reproduce (or manipulate) it.

Hoax theorists usually refer to "De onechtheid van het Oera Linda-Bôk, aangetoond uit de wartaal waarin het is geschreven" (The falseness of the Oera Linda Book, as proven by the the gibberish in which it was written) by J.B. Vinckers (1876, Netherlands).

First of all, it is suspect, that the alleged evidence was never translated (not even a summary) from Dutch, although there has always been some international interest. But this on itself does not yet prove that the evidence is worthless.

The author appealed to ridicule and emotional, strong language to make his points. His work did not lead to general consensus, but since the press took his side, opposing views were silenced and opponents intimidated. This also does not mean that he did not also bring forth any good arguments.

"this monstrous absurdity" ~~~ "linguistic madness"  ~~~ "hundred times more scandalous [...] than essay in a foreign language by a student, who dares to step on the slippery ice of a final exam without any linguistic preparation." ~~~ "The language in which this product was written, is a most detestable mishmash, gibberish, made by someone not ignorant in other topics, but absolutely unaware of the primal grounds of the linguistics of related German languages in general, and of the Old Frisian language in particular; a gibberish, nothing better than Negro-English; a gibberish, that makes the OLB to a disgrace in the line of most weighty remains of the Old Frisian language." ~~~ "A miserable hodgepodge of old and young, such a misfit of babel, that on every page, no in every line of the 126 printed pages, reveils its fake birth to the eye of the specialist through indisputable proof."

"I was recently informed that the late Mr. De Haan Hettema also declared the language of the OLB to be Frisian, older than that of the Old Frisian laws!! It's almost incredible."

(Vinckers' main argument will be summarised and refuted here.)


[A part about Hübner will be added somewhere else.]

At least some 'critics' in National-Socialist Germany saw in the OLB "... a political danger, as it suggests that Slavics would have lived in current eastern Germany, before the Germanic peoples." (translated from "Buchfieber – Zur Geschichte des Buches im 3. Reich" by G. Simon e.a., p.21)

This alone would have been enough reason in 1934 to suppress public discussion about the OLB.

The Online Etymology Dictionary states that the oldest records of 'bed-room' are from around 1600, but the words 'bed' and 'room' are both much older. Why would it be impossible or even improbable that the combination might have been used earlier?

The oldest known records of 'schout by nacht' are from around the same time, early 1600, but in these records the word is not explained. Therefore it will already have been known and nobody can know for how long.

Some words exist long in oral language, before they are written down. Also, our oldest written records are only a fraction of what once must have existed. 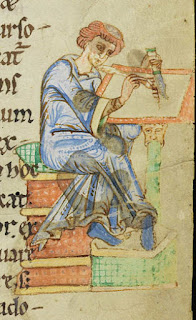 Our oldest accepted sources in what is called Old Dutch, Old German etc. were written by monks who had learned to read and write in Latin. Their earliest attempts to write in one of the many spoken dialects will have been more clumsy, than the later ones. Not only will they gradually have become better at representing individual words, also the syntax will have moved from a Latin inspired word order (aimed primarily at transferring information) to a more natural reflection of spoken language.

The dialects, some of which still exist in more rural areas, may have changed much less than the standardised languages, since they were passed on from mother to children, rather than from schools as has only happened in the last few centuries.

Icelandic is a good example of a language that has hardly changed over the last 1000 years, since the Icelanders have consciously decided long ago that they wanted to preserve their language.

The syntax of Dutch and German are very similar. It is clear that they stem from the same ancestral language, which can easily be much more than 2000 years old. In studying the age of languages, it might be much better to examine dialects, rather than old written records.

So in the end, that words or syntax would be too modern, merely is an argument from incredulity, which is a fallacy (variant of argument from ignorance):


P is too incredible (or: I cannot imagine how P could possibly be true); therefore P must be false.

Let me add that the OLB also contains many words that are still not understood, while many have been clarified only recently, in the forum-discussion that I mentioned earlier. In some cases, the syntax is very different from that of modern Dutch or German.


3. The paper would have been made in the 19th century. 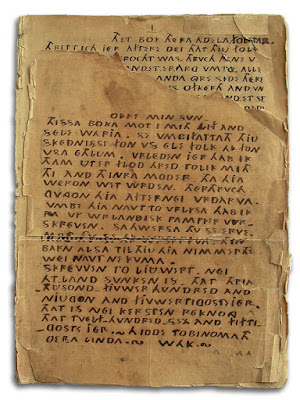 Paper and ink have never been properly investigated. In 1876 a book trader and a paper maker had a look at one page and decided, based on the pattern of waterlines, that the paper had to have been machine-made and thus from the 19th century, not considering the fact that 13th century Arab paper has exactly the same waterlines.

A more recent attempt to date the paper assumed beforehand, that it had to be from the 19th century, not even considering the possibility that it could be medieval after all. The results are vague and contradicting and a final report was never published. It is clear that they did not get the results they had hoped for.

The text of the OLB could be authentic, even if the paper is modern, since it could be a copy of an older original. Even hardcore hoax-theorists admit this. But if the paper turns out to be medieval after all, it can hardly be forgery. A serious, decisive investigation should be possible with modern techniques. That this was never done thus far by the archive that guards it, is suspect.

See my video about the paper age.


4. OLB would contain etymologies and historic claims that can not be true.

Examples of etymologies that often are considered too 'silly' for OLB to be authentic are NÉF.TÜNIS (kinsman Tunis) for Neptune and HIMMEL.LÀJA (lead to/ lie in the heavens) for Himalayas.

To some, such suggested etymologies make sense, but even if they were made up by an ancient author and far from the 'real' etymology, it would not make OLB fake.

There exist books from earlier centuries, containing etymologies that we would now laugh about, but that does not mean that these books must be recent fabrications. So-called 'folk etymology' may very well be a phenomenon of all times.

(... add something about alleged historic anachronisms or impossibilities)


5. Over de Linden's account of how he had obtained the manuscript varied, indicating he lied.

There are several conflicting versions of the story describing how Cornelis Over de Linden had received the manuscript: in his correspondence with Verwijs and Ottema, his diary and witness accounts by Jacob Munnik and Hein Kofman. (Details see here: April 2011.)

My suggestion is that he tried to cover up something that was embarrassing to him: He may have tried to get it from his relatives and in the end took it by force or without their consent. This would explain all conflicting information. They are relatively small lies that in no way exclude the possibility that the manuscript is authentic.

I want to point out here that the Over de Linden family does not have to be descendant in a straight line from the Oera Linda's who compiled the manuscript many centuries earlier. It is possible that Cornelis' forefather chose this modern version of the family name, because he was the proud owner of the manuscript and able to read (parts of) it.


6. The creators would have been convincingly unmasked in 2004.

In 2004 Goffe Jensma was promoted to Doctor at the Theological Faculty Groningen with his study about the OLB and his dissertation was published as "De Gemaskerde God". Two years later his new Dutch translation of the OLB was published. His study is not about the question whether or not OLB is authentic, but, assuming that it is fake, he theorised who could have created it and why.

Three days after Jensma's promotion, a discussion was organised where other specialists were invited to speak:

The next day a report appeared in de leading Frisian newspaper*, which stated:


Although the speakers without exception praised Jensma's work, he had not been able to convince any of them of his truth that François Haverschmidt is the main author of the Oera Linda-book.


Emeritus professor Frisian, Henk Meijering, teasingly labelled Jensma's thesis a <scientific novel through which he had acquired his doctorate>.

So Jenma's work did not convince other well-informed scholars.

For Jensma's theory to be right, many people must have lied: Over de Linden, Verwijs, HaverSchmidt and all the various witnesses who confirmed to have heard about the manuscript before it should have been fabricated. Such a conspiracy is in theory possible, but not likely.

Jensma later became professor Frisian language and culture at the University of Groningen, was involved in an educational television production that included one episode about the OLB, and was supervisor of the failing recent paper investigation. He has all the while been presenting his theory as if it were an accomplished fact, despite the initial scepticism of his colleagues.

By ridiculing in strong terms people who consider the possibility that OLB might be authentic, Jensma has created a difficult situation for himself, because his scorn will fall back on his head, when he turns out to have been wrong after all. It is only human, that he will use his academic power - as long as he has any - to keep up the myth that he has reinforced.