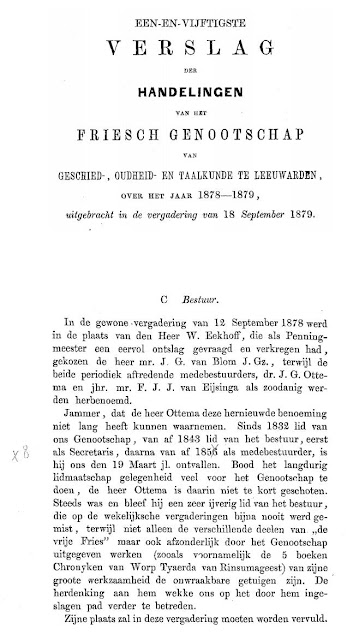 Fifty-first report of the proceedings of the
Frisian Society of History, Archaeology and Linguistics in Leeuwarden,
over the year 1878-1879, given in the meeting of 18 September 1879.

In the general meeting of 12 September 1878, mr. W. Eekhoff's resignation as treasurer was accepted. He was replaced by mr. J.G. van Blom, while both periodically resigning board members dr. J.G. Ottema and mr. F.J.J. van Eijsinga were re-elected in their function.

Unfortunately, mr. Ottema could not hold this renewed position for long. Since 1832 he had been member of the Society, member of the board since 1843, initially as secretary, later since 1858 as general member. He died last March 19. The long-lasting membership offered him many opportunities to be useful to the Society and mr. Ottema did not fail to do so. He always was and remained a very diligent member of the board, who was hardly ever absent at the weekly meetings, while not only the various issues of "the free Frisian" but also separate publications of the Society (especially the 5 books 'Chonyken van Worp Tyaerda van Rinsumageest') are incontestable witnesses of his high efficacy. May his memory stimulate us to continue the path chosen by him.

He will have to be replaced in this meeting.

From December 1870 till his death, that is more than 8 years, dr. Ottema has spent researching, translating, publishing and defending the OLB.

To him the book was sacred.

While the 1875 publication 'Friesche Oudheden' from the Frisian Society, was still very positive about the OLB (see translation in 11 parts that I posted in the last few days), it is emphatically not even mentioned in Ottema's obituary, only four years later.

Note that the full name of the Society is: Frisian Society of History, Archaeology and Linguistics.

By leaving the OLB out of his obituary, they not only proved their disrespect to Ottema who had been a member for 47 years, but to history in general.
at 13:07