Tabula Rogeriana (lit. "The Book of Roger" in Latin), is a description of the world and world map created by the Arab geographer, Muhammad al-Idrisi, in 1154. (wiki)

On the Latinised version of this map by Konrad Miller (1928), "ard al magus" lies in what seems to be the Baltic region, translated by Miller as Zaubererland; magicians-land or Heidenland; heathen-land (source, pp. 148-149). Credit for connecting Ard-al-Magus to OLB-Magí goes to mr. Puranen from Finland (see below).


One hundred and one years after the submersion of Aldland a people came out of the East. That people was driven by another. Behind us, in Twiskland (Germany), they fell into disputes, divided into two parties, and each went its own way. Of the one no account has come to us, but the other came in the back of our Schoonland, which was thinly inhabited, particularly the upper part. Therefore they were able to take possession of it without contest, and as they did no other harm, we would not make war about it. Now that we have learned to know them, we will describe their customs, and after that how matters went between us. They were not wild people, like most of Finda's race; but, like the Egyptians, they have priests and also statues in their churches. The priests are the only rulers; they call themselves Magyars, and their headman Magy. He is high priest and king in one. The rest of the people are of no account, and in subjection to them. This people have not even a name; but we call them Finns, because although all the festivals are melancholy and bloody, they are so formal that we are inferior to them in that respect. But still they are not to be envied, because they are slaves to their priests, and still more to their creeds. They believe that evil spirits abound everywhere, and enter into men and beasts, but of Wr-alda's spirit they know nothing.


According to Goffe Jensma, this is nonsense, and he theorizes that a supposed 19th century creator with this actually parodied orthodox protestants ('fijnen') and their superstition (magical thinking).


The main purpose of this blog post is to show another source for Magus-Finland relation, which will not have been known in 19th century Netherlands. This removes one of the main pillars of Jensma's doctrine. Mr. Puranen wrote to me many more interesting facts and thoughts related to the Idrisi map, which I hope he will publish about in the future. I will just add some further information below, not going into much detail for now.

The Arabic text by Al-Idrisi that accompanied the maps was translated into Finnish by Sahban Mroueh in 2012 (Hermeetikko Nro.1). Here is a translation into English and graphic, both by mr. Puranen:


In the fourth part of this seventh continent lies most lands of Russia, Finnmark, Tavastia, Estonia and Magus: and these lands consist mostly of wilderness, steppes, inhabited villages and persisting snow, with little populated areas, whereas land of Finnmark is land where lies plenty of villages, buildings, sheep and no other thriving built-up areas other than cities of Abrarah and Velmaar. These are two large cities but one can see nomadism and wildness rules their inhabitants. They have less food than the inhabitants need and they have continuous rain.

It's 200 miles to west from city of Saqto from city of Velmaar. King of Finnmark has lands and buildings in the island of Nerbagah mentioned previously. And from the city of Velmaar to area of Qutulu-river's other fork is 80 miles, and from Qutulu-river to city of Regoldah 100 miles, Regoldah being a great thriving city at the river delta flowing to the sea. It's a city belonging to the land of Tabasti and this land has plenty of villages and buildings but less populated areas. This land is colder than Finnmark, with frost and rain present all times. From city of Anho it's 200 miles to city of Regoldah.

Anho is beautiful inhabited city and part of Estland. City of Vloor belongs also to Estland cities and it's a small city like a big fortress, it's inhabitants are farmers with little products yet plenty of sheep. Vloor is 6 leagues to south-east from city of Anho. From city of Anho to river Burno is 50 miles going by sea shore and fortress of Velmos is 100 miles away from the shore. During winter it's an empty fortress and it's inhabitants flee to caves lying far from the sea. They receive shelter from there and make camp fire for whole period of winter and coldness, and won't relinquish it until summer comes and black colour fades from shores and rain stops, upon when they return to their fortress. From this fortress to city of Medsuunah is 300 miles, Medsuunah being a large thriving inhabited city, it's population large and inhabitants are fire worshipping Magi.

From there to the city of Suono belonging to the land of the Magi is 70 miles going by shore. Amongst the populated areas further away from the Magi's sea shore is city of Vapi. Distance between it and the sea is 6 leagues and it's a 4 day journey from city of Vap to city of Vloor. City of Jintiaar on 7 days to the west from the city of Vloor. It's a large thriving city atop an unclimbable mountain. It's inhabitants entrench themselves against Russian bandits and this city doesn't lie under authority of any king. And to the lands of Russia belongs the city of Martur. It's a city lying at the mouth of river Dinset and city of Sarmal is four days journey south from city of Martur.

List of toponyms in the area of Ard-al-Magus, as compiled by mr. Puranen (edited by me, JO) ard - area; bilad - land; gezira - island; nahr - river: 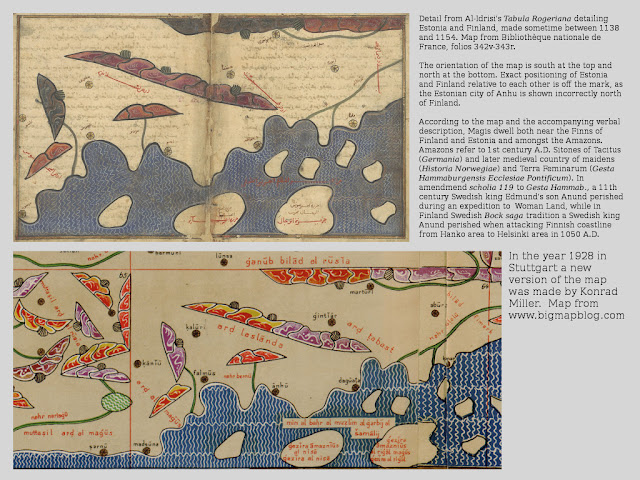 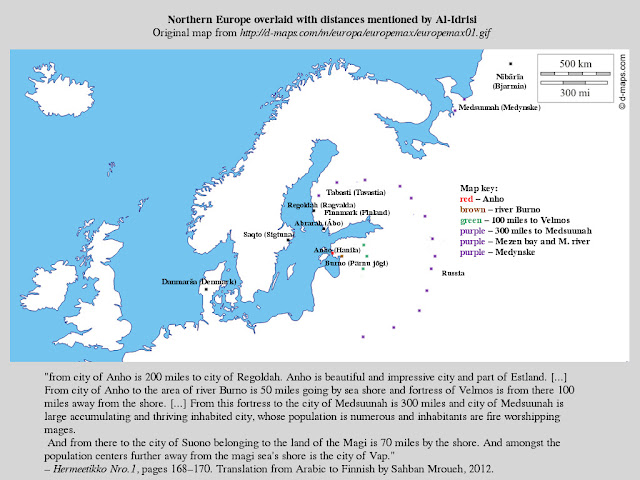